Recently an RV sold in Dubai for its asking price of $3.1 million. This hefty price tag put the RV on record as the world’s most expensive RV ever sold.

But why would someone pay so much for an RV?

Well for starters, the outside of the record-setting RV is covered in gold. Also, the RV is a double-decker that has tons of amenities, including a pop-up rooftop terrace, fireplace, master bedroom, underfloor heating, self-cleaning technology, a top speed of 93 mph, and much more. 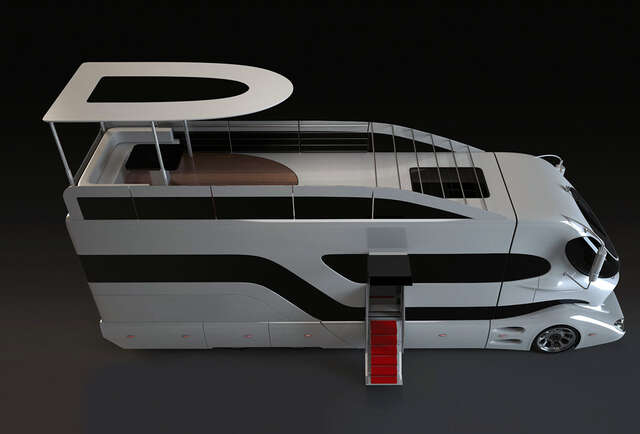 The RV may look like a weird prehistoric creature from the outside, but the interior is lavish and fit for a king. Take a look inside the the 40-foot-long eleMMent Palazzo, from Austrian company Marchi Mobile:

So if you’d like to travel with the family in style one day, you may want to start saving up now!

Dubai is a city known for excess. It is home to the world’s tallest building, the Burj Khalifa, as well as countless other luxury attractions.

The city is full of Arab royalty, foreign oil executives, and plenty of other people with lots of money to blow, so it’s no surprise that luxury cars are a dime a dozen on the streets.

Dubai’s police force is no exception. Check out the video below to take a look inside the Dubai Police Department’s fleet of supercars:

I had heard about Dubai PD’s super-fleet before, but didn’t realize until watching this video that the cars are essentially just for show. Don’t get me wrong, I like supercars as much as anyone, but this is a pretty egregious waste of public funds in my opinion.

I’ve never believed in spending lavishly just because you can, especially when more than a million migrant workers in Dubai are living in serious poverty, the very same workers who provided the labor that turned Dubai from a desert town into arguably the most modern city in the world in just over 20 years.

But whether you’re driving a 5-Series Beemer or a $1.9 million Aston Martin, your car will be the least of your worries when you pull over a guy who has a cheetah riding shotgun…

“We don’t like to scare ourselves- that’s not the goal. People think you base jump because you are crazy or you like to get scared…but, I mean, we like to fly, you know? We like to have fun.”

“Skydive Dubai sponsored Soul Flyers World Champions Vince Reffet and Fred Fugen break a new World Record by BASE jumping from above the pinnacle of the World’s Tallest Building.”

The Burj Khalifa will soon be replaced by Kingdom Tower in Saudi Arabia.

Next week, Saudi Arabia will begin work on a new skyscraper in the city of Jeddah. When completed, the Kingdom Tower will be the world’s tallest building by far at 3,280 feet (that’s a full kilometer, by the way).The Burj Khalifa is the current record-holder at 2,716 feet (827m).

Kingdom Tower will have 200 floors and will require 5.7 million cubic feet of concrete and 80,000 tons of steel for construction. Because of it s size, it foundation will have to be sunk a full 200 feet underground. The price tag for all this: $1.23 billion.

Check out some concept images of the Kingdom Tower (click an image to enlarge):

The consultants for the building, Advanced Construction Technology Services, had a couple of issues to figure out for the massive building. First, it’s going to be near the coast, so they’ve had to test out different concretes to find one that’s unaffected by the saltwater.

Also, with a building of that size, you have to worry about strong winds. Here’s Gordon Gill of Adrian Smith + Gorgon Gill Architecture, the architecture firm who designed the building, explaining how they dealt with that:

“Because [the building] changes shape every few floors, the wind loads go round the building and won’t be as extreme as on a really solid block.”

The Kingdom Tower might just be the tip of the iceberg. Sang Dae Kim, the director of the Council on Tall Buildings, thinks we might be able to build even higher:

“At this point in time we can build a tower that is one kilometer, maybe two kilometers. Any higher than that and we will have to do a lot of homework,”

he told Construction Weekly in an interview recently. Read more from CNN here.

With only a week left in 2013, it’s a good time to review some of the most amazing images taken from space this year.

Click an image to enlarge and read brief descriptions about each photo.

These two awesome time-lapse videos will make you feel like you’re flying through space. David Peterson, a film student and programmer, put them together using imagery captured by astronauts aboard the International Space Station.