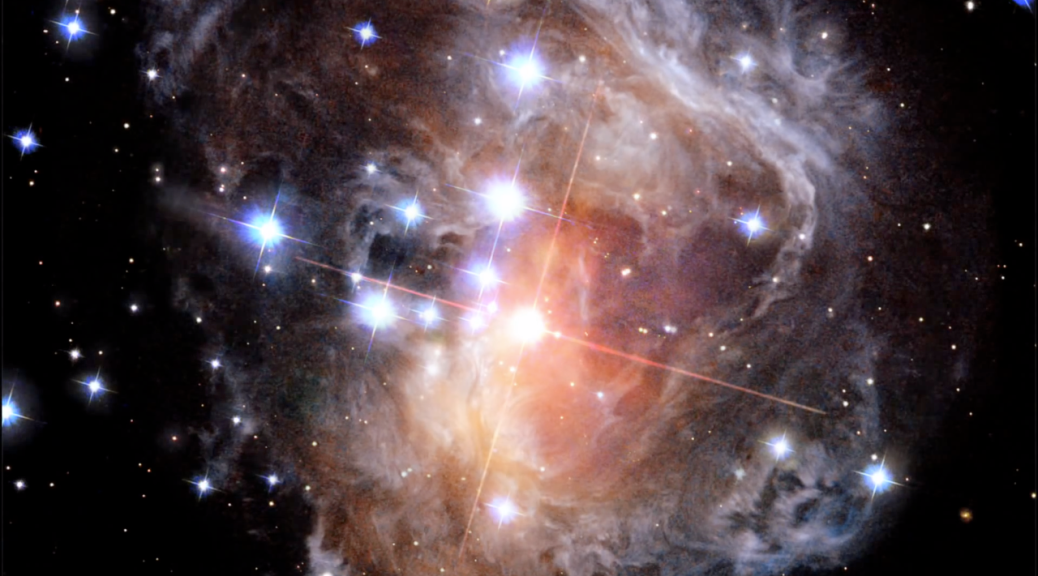 Back in January of 2002, astronomers witnessed a huge explosion from the star V838 Monocerotis, a red variable star about 20,000 light years away from our Sun.

At first, they thought it was a typical supernova (the explosion of a dying star), but after watching the explosion dim then brighten twice over a period of only a few months (supernovas will usually only dim after the initial bright explosion), astronomers really weren’t sure what they were dealing with.

Check out a time-lapse of the explosion from 2002-2006 below (full screen highly suggested).

So what exactly is going on with this explosion? Well, there are five possibilities that have been proposed so far:

It’s awesome to study the stars and find out exactly why they act the way they do, but sometimes explanations can be elusive. So while we search for answers, we should also make sure we take the time to simply enjoy watching this mesmerizing cosmic phenomenon.

With only a week left in 2013, it’s a good time to review some of the most amazing images taken from space this year.

Click an image to enlarge and read brief descriptions about each photo.

These two awesome time-lapse videos will make you feel like you’re flying through space. David Peterson, a film student and programmer, put them together using imagery captured by astronauts aboard the International Space Station.

A team of scientists from the University of Texas and Texas A&M put aside old football rivalries in the name of science to discover the furthest galaxy ever seen from Earth (z8_GND_5296 is its catalog name, it has yet to be given a common name). Because of the fact that 1. the universe is always expanding and 2. light travels at a finite speed, the massive distance between us and the galaxy means that what we are seeing is the galaxy 13 billion years ago- that is how long it has taken for the light of that galaxy to reach us. So the researchers get to see a snapshot of what the universe looked like when it was only about 700 million years old (it’s around 13.8 billion years old now).

Here is what the galaxy looks like through the Hubble Telescope:

The galaxy appears red because of the phenomenon known as “red-shift” in which the blue light emitted by stars get shifted toward redder colors because of the expansion of the universe and its large distance from Earth. The image at the top is an artist rendition of what the galaxy looks like up close.

(to read the full story, click the link below)