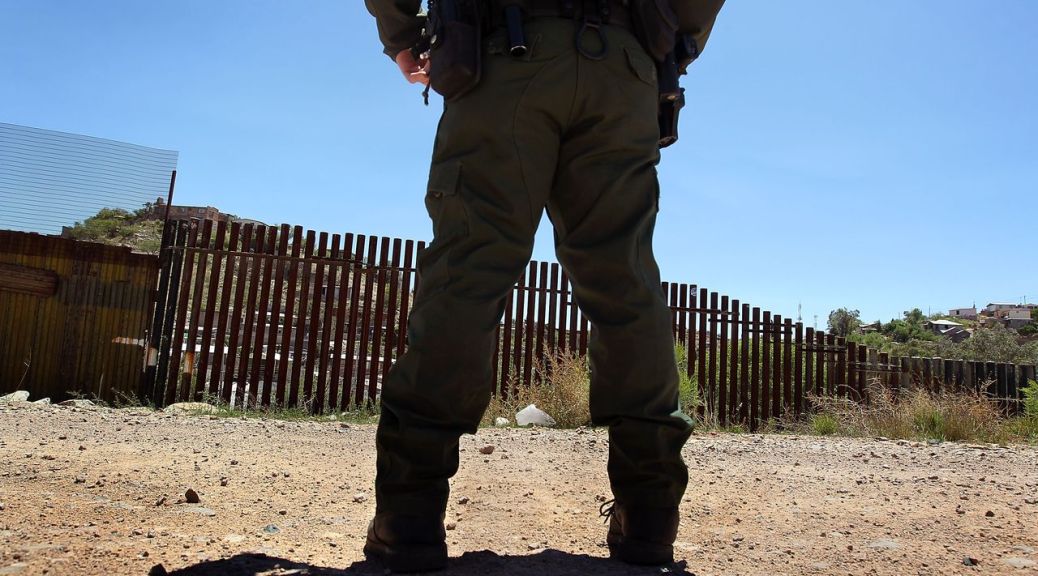 It all started back in 2006 when the U.S. Border Patrol Agency was searching for new ways to combat illegal immigration from Mexico. An increasing number of Mexicans were trying to cross the border illegally, and Border Patrol was finding it more and more difficult to combat the issue.

So the agency paid an undisclosed sum to Elevacion, a Washington, D.C.-based advertising company that focuses on advertising to Hispanic markets, to write and record a Mexican folk album. The songs were about tragic stories of people who tried to cross the border and were met with tragedy.

Those who decide to attempt to enter the United States illegally  face a number of potential perils on the journey:

“Professional smugglers and bandits who beat, rob, rape and abandon them; bitingly cold or scorching temperatures; snakes, scorpions; drowning; and death by dehydration or exhaustion.”

U.S. Border Patrol figured that producing music about these dangers might help dissuade Mexicans from trying to enter America illegally. They had Elevacion distribute that first CD to radio stations across Mexico over the past two years. Apparently, the majority of stations playing the songs and the listeners requesting them are totally oblivious about the original source of the music.

With the success of their debut album, the agency (along with Elavacion) is now working on its second CD, entitled “Migra Corridos“. The title was supposed to mean “songs of the immigrant,” but the word “migras” is also often used as slang for Border Patrol in many parts of Mexico.

The new CD brings with it a whole new set of tragic stories, including,

“a cousin who dies from dehydration, a mother who is raped and beaten by a child-killing smuggler, [and] one man’s suffocation in an airtight tractor-trailer.”

Here’s some excerpts from the upcoming album (translated from Spanish):

“He put me in a trailer / There I shared my sorrows / With 40 illegals / They never told me / That this was a trip to hell.” – El Respeto (Respect)

“After some hours / Abelardo opened his eyes / And in the middle of the cold night / Discovered his dead cousin at his side.” – El Mas Grande Enemigo (The Biggest Enemy) Have you ever woke up and thought, ‘I really feel like some bread with cold cuts and cucumber and a side of hard-boiled eggs and sliced tomato!’? Ya, me neither. It’s probably because we’re not from Sweden, where this is a typical breakfast meal.

Check out this BuzzFeed video that shows you what a typical breakfast looks like in a number of different countries:

The Cancun Underwater Museum of Art is the brainchild of English sculptor Jason deCaires Taylor. In November of 2009, he began the project by placing 100 sculptures in the shallow water of Cancun National Marine Park. He has since added more sculptures.

Taylor models the sculptures after members of the local community there, and since they are made of pH neutral marine concrete, they will become artificial reefs over time as they are covered with coral.

Check out some pictures of the museum (click an image to enlarge): 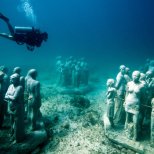 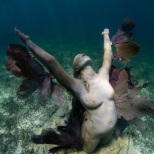 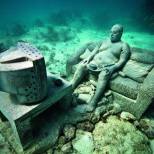 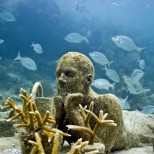 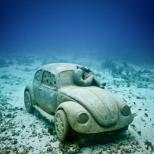 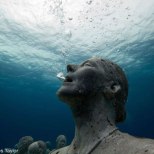 The goal is to divert divers from the already threatened natural reefs (where they often cause more problems) to the artificial reefs of the Cancun Underwater Museum.

Here’s a video from CNN which provides more information about the project:

He recently spoke to Democracy Now! about the current turmoil in eastern Europe. Here’s some of what he said:

“I think that what we have seen is a reaction, in many respects, to a long history of what the Russian government, the Russian president and many of the Russian people—most of them—feel has been a pattern of American activity that has been hostile to Russia and has simply disregarded their national interests.

“They feel that having thrown off communism, having dispensed with the Soviet Empire, that the U.S. systematically, from the time it started expanding NATO to the east, without them, and then using NATO to carry out what they consider offensive actions about an—against another country—in this case, Serbia—a country which had not attacked any NATO member, and then detached territory from it—this is very relevant now to what we’re seeing happening in Crimea—and then continued to place bases in these countries, to move closer and closer to borders, and then to talk of taking Ukraine, most of whose people didn’t want to be a member of NATO, into NATO, and Georgia. Now, this began an intrusion into an area which the Russians are very sensitive.

“Now, how would Americans feel if some Russian or Chinese or even West European started putting bases in Mexico or in the Caribbean, or trying to form governments that were hostile to us? You know, we saw how we virtually went ballistic over Cuba. And I think that we have not been very attentive to what it takes to have a harmonious relationship with Russia.”

I think a lot of Matlock’s points are pretty valid, but when it comes to trying to find causes for major political changes, it will always be somewhat unclear how responsible certain past events were.

So what do you think?

Here’s the full video of the interview if you’re interested.

In the past few months, US and Mexican authorities have been ramping up their efforts to dismantle the infamous Sinoloa Cartel, the largest drug cartel in Mexico.

The cartel, called, “the most powerful drug trafficking organization in the world” by US intelligence in 2010, is led by Joaquin “El Chapo” Guzman, one of the FBI’s most wanted men.

Guzman’s worth exceeds $1 billion, according to Forbes magazine, which also ranked him one of the “World’s Most Powerful People”, putting him above the presidents of France and Venezuela.

An operation between the 13th and 17th of this month raided a number of residences that Guzman was known to frequent, finding tunnels connecting seven of them to Sinaloa’s sewer system. It is believed that Guzman used these tunnels to make narrow escapes on a number of occasions.

Authorities found Guzman in the Miramar condos, which overlook the Pacific Ocean in the coastal city of Mazatlan.

“He got tired of living up in the mountains and not being able to enjoy the comforts of his wealth. He became complacent and starting coming into the city of Culiacan and Mazatlan. That was a fatal error,”

said Michael S. Vigil, a former senior DEA official who had been briefed on the operation.

Mexico may extradite Guzman to the US to reduce the risk of his escape. In 2001, Guzman escaped from a Mexican prison in a laundry truck (he was aided by insiders, and many suspect that the government of former Mexican President Felipe Calderon was involved).

The US government is not without fault though. About a month ago, The Higher Learning reported on how the US government played a major role in solidifying the Sinaloa Cartel’s power by giving them immunity between 2002 and 2012 in exchange for info on other cartels’ operations.

Read the full story from the AP here. 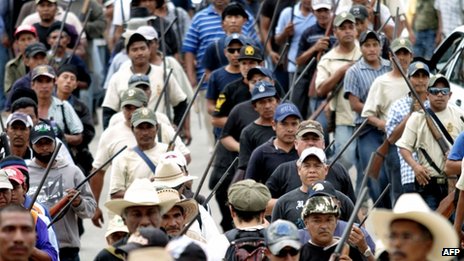 On Monday, the Mexican government announced that it would legalize vigilante groups that have been fighting the country’s drug cartels.

The Higher Learning has been covering this story since January 7, when we reported on a group of vigilantes who rolled into the Mexican town of Paracuaro in armored vehicles, disarming the corrupt local police and expelling all cartel members and their associates from the town.

Then, on January 16, we reported that the Mexican government was trying to disarm the vigilante groups, who responded by saying that they would not lay down their weapons until the government had detained all of the cartel leaders who are terrorizing the country.

Apparently, the government realized it was in their best interest to work with the vigilantes, rather than making them an adversary.

They announced that they would be institutionalizing the groups by incorporating as units of the Rural Defense Corps., a quasi-military force distinction that hasn’t been used in years.

The government also announced that they had captured Dionicio Loya Plancarte (also known as “El Tio” or The Uncle), one of the founders of the Knights Templar Cartel. The government had a $2.25 million reward on his head.

El Tio was taken without a shot being fired. According to the reports, he was found hiding in a closet.

Read the full story from he Business Insider here.

Last Tuesday (1/7/2014), The Higher Learning reported on a vigilante force that rolled into the Mexican city of Paracuaro, disarming the corrupt local police and expelling all drug traffickers and cartel members from the town. 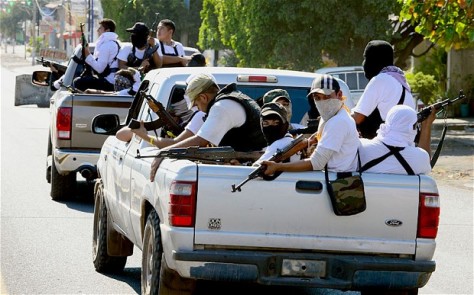 Now, the Mexican government is getting involved. But instead of giving the vigilante groups support in their fight against the cartel, the military is being sent in to disarm the vigilantes themselves.

The Mexican interior minister, Miguel Angel Osorio Chong, has urged the vigilantes to either join the police force or lay down their arms. The vigilantes, however, aren’t keen on following the minister’s wishes.

These are the words of Estanislao Beltran, the leader of a vigilante group in the city of Tepalcatepec which recently lost two members in a firefight with federal forces. The Knights Templar is one of the region’s most violent gangs, and controls the majority of the methamphetamine trade in America.

Read the full story from the BBC here.

Higher Learning
Create a free website or blog at WordPress.com.