Professor Daniel Janzen, a biology professor from the University of Pennsylvania, has spent years of his life cataloguing and photographing a very unique group of creatures: caterpillars that defend themselves against predators by looking and acting like snakes.

Check out some more pictures of “Snake Caterpillars” taken by Professor Janzen below: 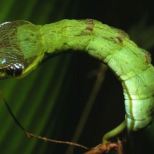 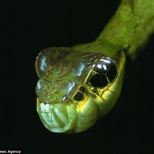 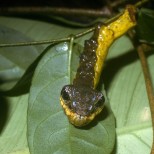 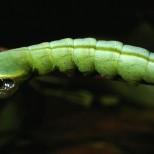 Snake caterpillars can be found in Costa Rica, Guatemala, Belize, and some parts of Mexico. Their markings resemble a snake’s head, which they can actually use to “strike” at would be predators (though they obviously can’t bite like a real snake would).

Janzen is an ecologist and what most would call a caterpillar expert. He’s been tracking these insects in Costa Rica since 1978 and  has been an expert in the field of entomology (the study of insects) for 50 years.

He splits his time between his labs and the field, spending half the year at the University and the other half in Central America, searching for strange new species of insect like the snake caterpillars.

Janzen took most of the photos shown above just last month while cataloguing caterpillars like the snake caterpillar in the Area de Conservacion Guanacaste in Costa Rica.

This snake mimicry is exhibited in a number of caterpillars from the hemeroplanes genus of moths. The green colored caterpillar above becomes the Hemeroplanes triptolemus after completing its pupal stage.

Another species of caterpillar with the ability to mimic snakes emerges as the vibrantly colored elephant-hawk moth (Deilephila elpenor), pictured below (click an image to enlarge).

Gilberto “Chito” Shedden is from the small fishing town of Siquirres in Costa Rica. Ever since he was a child, Chito was fascinated with the animals that everyone else avoided- namely crocs. Chito, a fisherman and tour guide, always took every opportunity to interact with the beasts.

“We’d be out there sometimes in a boat, so I’d get close to them, perhaps give them a piece of chicken so I could get close and touch them. I was always very careful with them. I respect animals and always maintained some order to not have problems. If a croc was upset, I couldn’t get close. I tried to show them that we are friends and not bother them so they never try to bite me.”

One day, Chito discovered a croc who had been shot in the eye by one of the local farmers and decided it was his duty to save it. Despite the misgivings of friends and family, Chito took the three meter long reptile back to his home.

Chito would let the croc, who he named Pocho, hang out on the banks of a nearby lake during the day, and would visit to feed and comfort him during the evenings.

“At first he wouldn’t eat it, but then he began to eat. I kept feeding him chicken until he started looking good. I would try to pet him so he would feel that I cared about him. When I would touch him, he would sometimes get a little irritated, so I kept on caressing and caressing him. And I would say, relax, relax. I want to be your friend. Behave nicely ’cause you won’t be bothered anymore…I would touch, at first, his tail, then the belly, till finally I touched his head. When I touched the head, that’s when we had finally become friends.”

Learn more about the story from an interview Chito did with NPR here. The giant reptilian beast in the picture above was finally captured on the fourth day of a search for the beast by the Ugandan Wildlife Authority (UWA).

The crocodile was believed to be responsible for taking the lives of four local fisherman on Lake Victoria and maiming several others in recent years. Many fisherman had begun to refuse to go out on the lake until the massive croc had been removed.

Using a massive hook and piece of meat, the UWA was able to trap the crocodile. Over 100 local villagers came to see it be removed from the lake. It weighed in it at 1000 kg (~1.1 U.S. tons), just 47 kg less than Lolong, the former world record holder for heaviest crocodile (she died last year).

Experts approximate that the crocodile is around 80 years old. After being captured, it was transferred to Murchison Falls National Park.